Tripawds Supporter sites have no ads!
Skip to content

Tripawds is a user-supported community. Thank you for your support!

Carly loved sitting on the couch. And I mean she loved it. Almost as much as sitting outside. We have an open floor plan so she enjoyed just hoping up on the couch, sitting in the corner and just watching her people go about their daily lives. She loved being able to watch everything that was going on in her house. After losing her leg jumping has scared her, and for two weeks we didn’t let her. Just a few hours ago we were sitting on the couch and she was laying at our feet when she just got up and stared at us. We asked if she was hungry or thirsty or even if she wanted to go potty, none of those options seemed appealing to her. Then I asked her if she wanted to get up on the couch and she did her cute head tilt and her eyes lit up, so my dad got up and helped her up on the couch. She looked so excited and happy. She laid on my lap and cuddled up and watched Grey’s Anatomy with us, and it felt like old times. 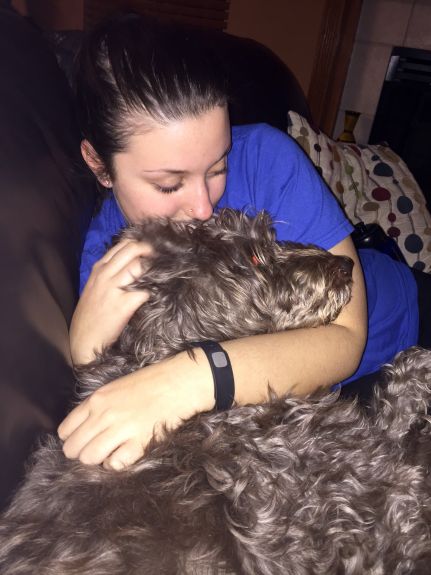 When Carly first came home Ellie was scared to lay to close to her, probably in fear of hurting her. For two weeks Ellie kept her distance and it was beginning to take a toll on her and on Carly. Ellie and Carly are attached at the hip. Ellie follows Carly’s every move and she simply adores her sister. Yesterday I was laying on the floor with Carly when I was finally able to coax Ellie into laying down with us, she wouldn’t get very close but it’s still a step in getting back to how things were in the beginning. 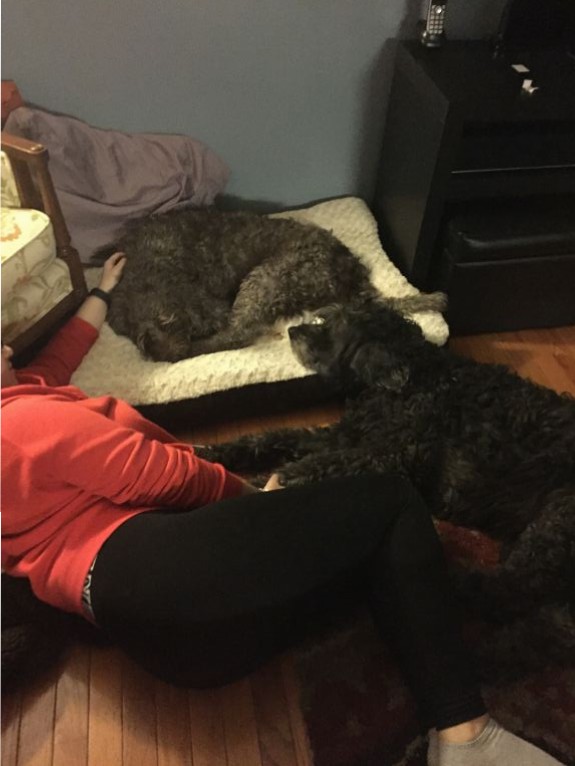 When I first found out we would have to amputate I did tons of reading and multiple people said it was harder on them than it was on their fur child. I just thought they were over exaggerating, but boy was I wrong. As each day passes I realized time and time again that it is harder on me than on her. Every day Im so thankful that my fur baby/bestfriend is feeling better and getting back to her old self. Plus, I really missed snuggling on the couch with her.


To remove ads from your site and others, upgrade to a Tripawds Supporter blog!

Add an excerpt to your posts to provide a summary for readers in many blog themes!

Tripawds is a user-supported community. Thank you for your support!

At 6 years old my parents got my sister and I two adorable labradoodle puppies, Carly and Ellie. For the past 10 years Carly has been my baby and my best friend. We did everything together. When she was around seven she started having mild hip pain, but other than that she’s been in great health her entire life. We used to joke about how Carly was a wild dog. She loved being outside and just running around. She’s never happier than when she’s outside.

On January 23 we let Carly outside to go do her thing (in the winter she has a time limit because otherwise she’ll stay out there until she freezes). She came inside limping and was in a noticeable amount of pain. Our family vet however wasn’t open so we took Carly to the Diley Hill Animal Emergency Center. Seeing was she had been so healthy we went in thinking we’d come out in about an hour and she’d be in a cute little cast. Boy we were wrong. They took multiple sets of X-rays, which didn’t seem odd at the time. The vet probably spent about 20-30 minutes looking at her X-rays before coming to get my parents  Again, i thought nothing of it when they had been gone for 20 minutes.

My mom was the first one to come back into the room and i knew something was wrong because my mom had clearly been crying. That was when they told me that Carly had broken her femur due to what looked like osteosarcoma and we would have to amputate. Her chest X-rays however looked clear, which could be a good sign of it having not spread. As some who doesn’t cry, i’ve done a lot of crying.

We got to take Carly home for the weekend and on January 25 we took her in for her amputation. The surgeon said she was doing great and she came home a day later. On her one week check up we received her biopsy results, she did in fact have osteosarcoma. And immediately the vet was pushing for chemo, something we weren’t and aren’t interested in doing. The research my parents had done said that osteosarcoma usually comes with a time limit so we didn’t want whatever time Carly had left to be spent doing treatment.

On February 9 we took Carly to our family vet to have her stitches removed. On her two week check up her surgeon wasn’t giving us straight answers, so we decided to get a second opinion from our well know and well loved family vet. He removed her stitches and told us we could do chemo but with osteosarcoma it would be borrowed time. However, having looked at her blood tests prior to her amputation he said that since her level were only slightly elevated he thinks we might have just caught a lucky break (pun intended) and gotten it early enough before it spread.

As of right now, we’re simply just taking it one day at a time. We’re not doing treatment simply because theres no guarantee it will work and we want her to have the best quality of life possible. So that means lots of love, treats, outside time (when warm enough)

Being the nervous nelly that I am when it comes to her, we’re making her wear a onesie so she stays warm until her fur grows back. 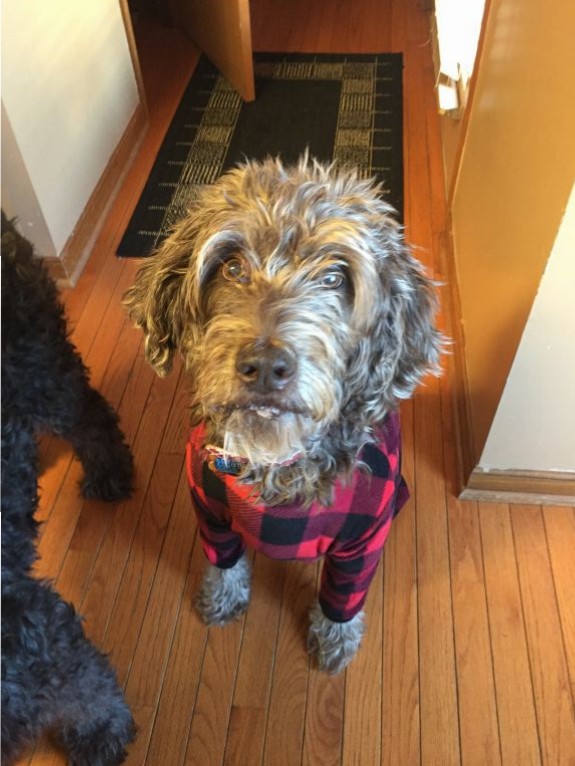 About Your Tripawds Blog:

New Tripawds Bloggers: Please review your default first blog post at left for lots of helpful links for getting started with your blog or review the Help Videos in your dashboard. Edit these widgets from your Appearance settings to remove this notice, upload a custom header photo, or choose from 130+ themes, and much more!

Carly the labradoodle and her apmutation is brought to you by Tripawds.
HOME » NEWS » BLOGS » FORUMS » CHAT » YOUR PRIVACY » RANDOM BLOG


Tripawds Supporter sites have no ads!